May 23 -- Feast of Saint Alexander Nevski 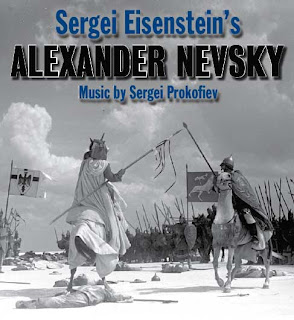 Alexander was the King of Novgorod and protector of Russia. He dealt with invasions from the Tartars, the Lithuanians, the Swedes, and the Teutonic knights. Everyone from the west got their backsides booted, but the Tartars were diplomatically redirected. Thus, he was a wise king as well as brave and formidable. As he attributed his victories to his visions of Saints Boris and Gleb, he was also recognized as pious. He retired to monastic life shortly before his death in 1263.

As you can see from the graphic, Sergei Eisenstein made a film about him. Sergei Prokofiev wrote the score. Peter the Great named him protector of his new capital St. Petersburg, and the Soviets capitalized (can Communists capitalize?) on his popularity. During World War II, they welcomed an armored cav division named for him and financed by the Russian Orthodox Church. They also restored the Order of Alexander for military valor, though of course he was not called St. Alexander.

His nationalist reputation even extended to ecclesiastical matters. The Pope sent legates to his court to offer religious instruction. Alexander told them, "We know the law of God very well and will take no lessons from you." I guess that's why he's only a saint in the East.


I probably should have left this until November, which is when the Eastern Church celebrates him. He was, after all, Orthodox, but the opportunity to have two film posters in a row was irresistible.
Posted by Tom Major at 4:00 AM