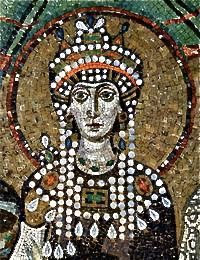 The daughter of Arcadius and Aelia Eudoxia, the emperor and empress of the Eastern Roman Empire, Pulcheria was an exceptional woman. Her mom lived the life one would expect of royalty -- not immoral in our sense, but luxurious and gaudy. She (Eudoxia) ran afoul of Saint John Chrysostom, Bishop of Constantinople, who declared that a silver statue of the Empress (and the unveiling celebration for it) dishonored the Church. John had already been exiled and recalled once for criticizing Eudoxia -- his comparison of her to Herodias and himself to John the Baptist earned him a one-way ticket to the Caucasus. When he was posting letters critical of the Imperials from there, they further relocated him in Georgia, but he died on the way.

But this is not about John and it's not about Eudoxia, who died a couple years after, soon followed by her husband. This is about Pulcheria, who was still a minor when her folks died. Her younger brother became emperor, but obviously regents were appointed. They were veteran palace administrators, loyal and wise, but Pulcheria, even at fifteen, was a woman who knew her on mind.

One of the regents offered to arrange a marriage for her, perhaps to his grandson. She had two reasons for dedicating her virginity to God instead of getting hitched. First, she was all about God, having more or less sided with Saint John Chrysostom against her mom (more on that). Second, she knew that her husband would have a lot more power than she, even if he wasn't from the imperial family, and she was not about to give away power.

Having come of age, she thanked the regent for his good service and gave him the gold sundial. She appointed herself regent for her younger brother and set about training him in all ways to be emperor -- how to sit up straight, wear his clothes right, ride a horse, all the important stuff. Her hardest rule (at least for me) would have been to avoid loud laughter -- I'd rather laugh than be an emperor. Apparently poor little Theodosius felt the same way; he was a careless, affable emperor who got himself killed in a hunting accident many years later. But through his reign, Pulcheria had been insisting on a monastic regimen in the palace, chanting and praying and fasting for herself, her sisters, and all the servants. They gave up the jewelry and finery, preferring instead to provide food and clothing for the poor. This -- and the restoration of honors for the late John Chrysostom -- led to her being much admired by the Church folks. In fact, the Church even blessed the marriage of Pulcheria to a guy named Marcian so that she could succeed her brother, even though it was publicly acknowledged that the marriage would never be consummated and she was too old to produce an heir.

Pulcheria arranged a marriage for her little brother when he was twenty, meeting his specifications for a wife ("smokin' hot!"), but the young wife was always jealous of her sister-in-law's influence over Theodosius and the two quarreled. Pulcheria also got into a fierce fight with the Nestor, the archbishop of Constantinople, who accused her of adultery and campaigned hard against her. Eventually, in a dogmatic fight over the human nature of Christ (and therefore the role of Mary Theotokos), Nestor was vanquished and exiled. Of course the inter-diocesan rivalries (especially Alexandria and Constantinople) had much to do with that too, but there's no doubt that Pulcheria was in the thick of the fight.
Posted by Tom Major at 7:19 AM