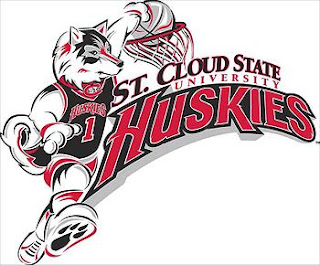 Saint Cloud (Saint Clodoald) was not really a husky. In fact, he wasn't a dog at all. The husky is just the mascot of the state university in the city in Minnesota named for the saint.

Clodoald was born into the French royal family way back in AD 522. That was before there was even a country called France, but there were people called Franks, and they were jostling for control of the Seine River Valley. Clodoald's dad, Clodomir, died in battle while his youngest son was just a wee bairn. In fact, all his sons were still wee, which tempted Clodomir's brother to come in and kill them (even though his own mother, Clotilda, was caring for them). Oh those evil uncles, always trying to kill children and steal their inheritances.

Wisely, no one tried vying with Uncle Clot-head for the throne, either for their own sake or on behalf of Clodoald. That gave Clodoald the space to enter a monastery and give his life over to God. He had fled to Provence, where he lived as a hermit, but was popular with pilgrims who credited him with powers to heal and perform miracles. He was, after all, the Boy Who Lived. (Hey, Major! Enough with the Harry Potter references!) But seriously, it is tough to be a hermit when you've got a thousand people camped on your lawn, all asking for your blessing.

He figured he might as well be in Paris for all the privacy he was getting, so he joined a monastery up that way. After his death, it became known as St. Cloud.