September 6 -- Feast of the Miracle at Colossae 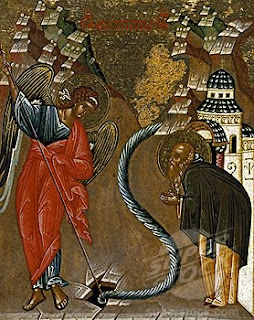 Here's one from the Greek Orthodox Calendar.

Near the modern Turkish city of Honaz is the unexcavated site of the ancient Greek settlement of Colossae. The Colossians are perhaps most famous for getting a letter (epistle) from Saint Paul telling them to beware of false prophets and leaders, and to avoid bogus rules and rituals.

As was predicted by John the Apostle, a spring with healing power burst forth near the town. John also predicted that Michael the Archangel, Chief Commander of the Heavenly Host, would visit the place (and I guess that also happened). When the waters cured a nearby pagan's daughter of muteness, he converted and established a church in honor of Michael the Archangel.

However, other area pagans, conspiring to destroy the Church at Colossae, engineered a dam to divert two rivers, flooding the community and inundating the holy spring. Whether by earthquake or lightning (or both), the rivers were again diverted and guided into underground channels. Chonae means funnels, referring to the new, underground course of the rivers.