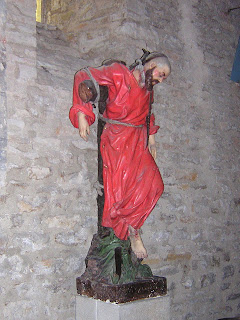 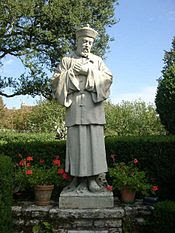 September 11 is no longer a day on the calendar; it has irreversibly become an event. Those with birthdays and wedding anniversaries on the day will always have to give a little extra room for the acknowledgment of the four coordinated suicide-attacks on New York and Washington DC by nineteen Islamist terrorists. It is, therefore, with some reservation that I highlight a guy who got killed 171 years ago on the tenth anniversary of the deaths of around 3,000 people. I feel some reservation, but I feel more strongly that a single event, no matter how terrible, must not obliterate everything else associated with a single day. November 22 is not a bad day for a football game; there's nothing wrong with being baptized on December 7. We must strive to remember, and we must learn if we can, but to give over a whole day to grief and solemnity is, in one sense, letting the evildoers win.

With that in mind, I find the life and death of Saint Jean-Gabriel to be peculiarly related to the al Qaeda attacks. It is pretty clear that al Qaeda opposes both the global influence and the Christianity of the West, and particularly of the USA. In the 1840s, the USA was a piker, but the West was already ascendant, striving to export Christianity and manufactured goods throughout the world. Jean-Gabriel, a French priest and professor of theology, was far more concerned about religion, but Lord Palmerston, the British Foreign Secretary, was more concerned with the balance of trade.

The short story of Britain's problem in China was the popularity of tea. British were buying it, but had nothing much to sell to China (and thus were hemorrhaging silver currency) until they started exporting opium. This grew especially well in a region of what they called India; that same region became Afghanistan and northern Pakistan, the base of operations for al Qaeda in the last dozen years or so.

Chinese attempts to control the trade of opium irritated British merchants, who complained to Lord Palmerston, who launched a war between Britain and China in 1839, three years after Jean-Gabriel sailed to Macao to preach the Gospel. Chinese officials in Macao made no distinctions between British and French, or between merchants and missionaries. When the First Opium War began, Jean-Gabriel was gaffled up with the rest of the Europeans. He was tried, convicted, tortured, and finally hung on a cross (and then strangled to death) on September 11, 1839.

Globalism, materialism, religion, cultural clash... and murder. Courage and sacrifice, too. Although 9/11 may be a day to reflect on these, they are constants in human history.
Posted by Tom Major at 4:00 AM