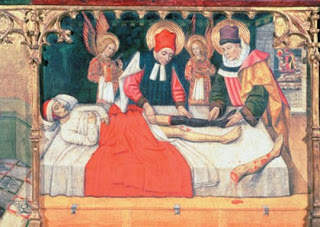 Cosmas and Damian were physicians practicing in Cilicia (Turkey) during the third century AD. Sources disagree about the year of their martyrdom. If they died in 284, as the Greek Orthodox on-line chapel suggests, then they were killed during the reign of Numerian and Carinus. If they were killed in 287 (per Wikipedia), then they are at the vanguard of the myriad victims of Diocletian's persecutions. Not that it much matters -- dead is dead.

As physicians, they healed both humans and animals, asking no more payment than faith in Jesus. Because of this, they were called "Silverless" and "Unmercenaries." One of the coolest, most miraculous healings attributed to them was a leg transplant. Since they had the leg of a recently deceased Ethiopian, they were able to replace the ulcerated leg of their patient. (See picture.) Among their patronages are physicians, dentists, barbers, pharmacists, veterinarians, day-care centers, and confectioners. Their surgical instruments, considered holy relics, are kept at the church of their name in Rome.

The local governor, Lysias, was eager to break their faith, so he hung them on crosses, had them stoned, then shot with arrows. Having failed to force them to recant, he ordered them beheaded. Their younger brothers, Anthimus, Leontius and Euprepius, were executed with them.
Posted by Tom Major at 6:44 AM