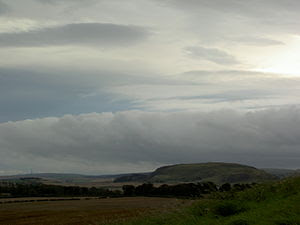 A few miles east of Haddington in East Lothian, Scotland stands a hill called Trapain Law. It looks like a lovely place to build a hill-fort, but not much of a place to raise your daughter. Speaking of daughters, don't name yours Dwynwen, which is another name for today's saint. There's another saint Dwynwen, the Welsh patron of lovers celebrated on January 25. She got to be the patron of lovers because her boyfriend raped her after her dad announced her betrothal to another man. She of course ran away and prayed that all vestiges of the incident be wiped from her body, mind, and soul.

This Dwynwen (also called Theneva, Thenog, Thaney, and Enoch, among other names) at least did not have the misery of rape. However, she did get knocked up before marriage, and Scottish princesses are not allowed to behave that way, even if their dads are only the kings of a few miles of barren wasteland. She was thrown into the sea from the bluffs of Trapain Law. Fortunately, she survived the fall and happened to see an empty boat bobbing around in the water. Deus ex naviga, I guess, or perhaps navis ex deo. Anyway, she couldn't go home again, so she sailed further on the Firth of Forth until she found a father. [I wanted to work feather in there somewhere, but I imagine her heart was somewhat heavier.] She landed at Culross and was taken in by Saint Serf who became the foster father of her son, Saint Kentigern.
Posted by Tom Major at 4:00 AM