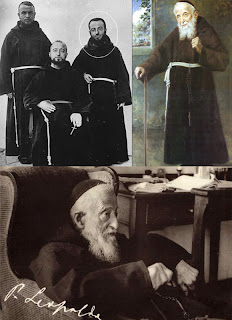 This poor little Croat stood four-foot-five when he could stand upright, which wasn't for very much of his life since he had a curvature of the spine. He had bad eyesight, poor digestion, and jittery nerves. After becoming a Capuchin monk, he wanted to preach in his homeland (then part of the Austro-Hungarian Empire) but because he stuttered, his superiors assigned him to other tasks, like hearing confessions. After all, you don't need eyesight, height, or oratorical skills to sit in a box and listen. This was a big disappointment to him, as he was sure his calling was to facilitate the reunification of the Eastern Orthodox and Roman Catholic Churches. However, he accepted his lot in life, serving as a confessor for decades. It is boring work, of course, so he drank copious amounts of coffee, suspected as cause of the esophageal cancer that killed him. [I say this with a venti Guatemalan in my gut. Hmmm.]

He had studied in Italy, and was still serving there (despite requests to return to Dalmatia) when World War One broke out. Since he had never renounced his Austro-Hungarian citizenship, he was exiled to southern Italy where he would be unable to help his countrymen.

The other friars complained that he was wide-sleeved (i.e. too lenient) with his penitents. In fact, they complained so much that the bishop called him on the carpet about it. He told the bishop, "If the Crucified should reprove me of being 'wide-sleeved', I will respond to him saying 'Paròn Benedeto('Blessed Boss'), what a bad example of this You Yourself have shown me. But as for me, I haven't yet reached the point of folly of dying for souls!" Told him!

The quote comes from a Capuchin site that's not otherwise credited, but the page for him is well worth the click.
Posted by Tom Major at 4:00 AM