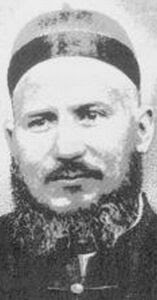 Alberic entered the seminary at age twelve. Just think about what for most of us might be seventh grade -- then imagine going to seminary and finishing the program on schedule. He was ordained twelve years later, which is a hell of a lot of school. Granted, those of you who went straight from undergraduate to grad school -- especially you docs (medical, juris, or otherwise) -- also put in a lot of years. But you had your nights, weekends, spring breaks, etc.

It was, of course, Alberic's choice. By the 1870s, he knew exactly what he was signing up for and staying around for. But I mention it in order to emphasize the opportunity costs, the forfeited fun, the irrecoverable moments of adolescence that slipped away.

All this seems worth considering in Alberic's case since he accepted a post at a mission in China, Shensi Province near the Han River. Twelve years later he was transferred to Ningkiang, where he was captured by the Society of Righteous and Harmonious Fists, nicknamed Boxers in the western press.

The Boxer Rebellion was an understandably violent reaction to the ridiculous level of exploitation that China was suffering at the hands of the western powers. Spheres of influence (essentially hijacked seaports), unequal treaties, extraterritoriality, opium trade, political and economic manipulation, and not insignificantly, Christianization were all pissing many Chinese off. But the rebellion, arguably justified, was a brutal as the exploitation had been. Alberic, for example, was captured, tortured, beheaded, and then his body was hacked to pieces.

Collectively, China was severely punished for the Rebellion by the eight western nations involved, but I'd like to think that Alberic would have preferred a more clement and forgiving settlement. He is a saint, after all.
Posted by Tom Major at 8:41 AM