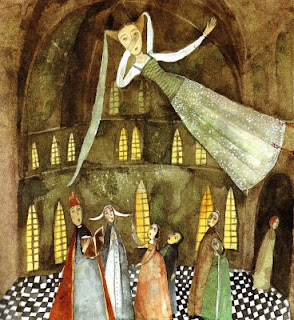 There are several saints named Christina who are celebrated on July 24. Two of them seem to be Christian daughters of pagan parents who suffered ghastly, prolonged executions. Let's get graphic, shall we?

When they tried to kill Christina of Tyre, they lit a large fire and tossed her in. She of course was unharmed, but the fire got out of control and killed a couple hundred pagans. They figured they could get her attention by slicing her breasts off. The severed breasts instead got their attention by producing streams of milk on their own. She kept preaching through these punishments, so they cut out her tongue. Her preaching continued loudly and clearly; she also flung the tongue at the judge, blinding him in one eye with it. They thought maybe dumping her in the ocean would settle her hash, but she met Jesus at sea, who baptized her and then asked Michael the Archangel to send her back for more trials. (Thanks, guys!) At last, they shot her in the heart with an arrow.

Christina of Bolsena was not just a Christian. She took her father's collection of gold and silver idols and smashed them. Then she gave the pieces to poor folks. Dad was enraged, of course, and like any good father, ordered her to be thrown into the lake with a mill stone tied around her neck. (Why did they waste so many good millstones when any old rock and net would do?) She came back to chastise them, so they cut out her tongue. That didn't stop her, so they tried the fiery furnace. Again, that wouldn't do it, so they shot her full of arrows, and by the grace of God, she reposed at last.

Christina the Astonishing, patron of psychiatrists and those suffering mental illness, did not suffer a brutal death, but life itself was no great treat. At age twenty-one, she had a severe fit, going so cataleptic (are there degrees of catalepsy?) that they declared her dead. Then in the middle of her funeral, she levitated to the rafters of the church. The priest ordered her down, so she lighted in the altar and told of visiting hell, purgatory, and heaven. Although she prayed all her life for the salvation of others, she could not stand being around other people because she could smell their sins. If people came near her, she'd hide in cupboards or ovens, or just levitate away from them. She wore only rags, slept on rocks, stood for hours in freezing water, rolled in fire, kept vigil in tombs, and even allowed herself to be dragged under the water wheels of mills. During ecstatic fits, she guided the recently dead to purgatory and sometimes guided those sprung from purgatory to heaven.
Posted by Tom Major at 4:00 AM