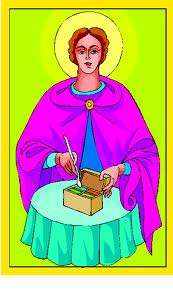 Got a headache? Troubled by witchcraft? Consumption? Locusts? Loneliness? Pantaleon, a patron of medical doctors, is invoked against all those things.

One of the Fourteen Holy Helpers (Western tradition) or Fourteen Unmercenary Healers (Eastern tradition), Pantaleon was a Bithynian physician during the reign of Diocletian. That there was such a martyr named Pantaleon seems certain. Everything else comes along later, and while it makes a good legend, it is "valueless" (according to the Catholic Encyclopedia). Actually, I find it instructive that the Orthodox tradition includes the earlier miracles, but not the protracted execution. The western legend is lily-gilding, I suppose.

Pantaleon had a Christian mom, but after her death, his rise to prominence in the medical field drew him away from the faith. After all, traveling in the best circles, it would be convenient to follow the state religion, especially since he was living during the dangerous reign of Diocletian. He became the physician to Augustus Maximian, one of the co-emperors (my least favorite of the four, in fact). But a Christian healer named Hermolaus called him back to the Faith, saying, "But, my friend, of what use are all thy acquirements in this art, since thou art ignorant of the science of salvation?"

Pantaleon converted his father to Christianity by curing a blind man with prayer. When Dad died, he left Pantaleon a fortune, but the good doctor freed all the slaves and gave all the money away to the poor. Local polytheists, especially fellow physicians, got freaked out by that generosity and had him investigated on suspicion of Christianity. Sure enough, they were right: he was a Christian. Busted!

Naturally, his connection in the household of Emperor Maximian got him some deference, so he was offered the chance to apostatize. He preferred to demonstrate the power of his God by healing a paralytic. The Emperor wasn't going to put up with that sorcery so he ordered him killed.

At this point, the Greeks say that he was beheaded, and the execution of Hermolaus followed shortly after. The Romans prefer to say that attempts to kill him were unsuccessful until he himself was ready to die.

First, his flesh was burned with torches, but Christ appeared in the form of Hermolaus and healed him. Then they tossed him into a cauldron of molten lead, but again Jesus was beside him to cool the lead and protect Pantaleon. They threw him into the sea, but the stones to which he was tied floated. They sicced the wild beasts on him, but the animals all huddled around him and would not leave until he blessed them. They were going to break him on the Wheel, but the wheel broke instead. They tried to behead him, but the sword bent against his neck. At last, Pantaleon prayed for the souls of his killers and allowed the sword to cut his head off; milk flowed with his blood from his body.
Posted by Tom Major at 4:00 AM