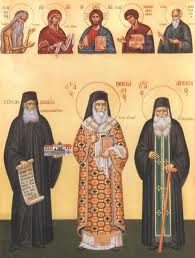 Sometimes the tough decision is about the picture instead of the story. The central story of Athanasius' story is pretty clear: he was willing to take extreme measures to avoid taking leading positions in the Church. But representing someone who wanted to be out of the picture is a little tougher.

Athansius was educated in Constantinople in the tenth century. He served at Saint Michael's monastery in Bithynia (Turkey), but fled when he feared he might be elected abbot. It's a little alien to us that someone couldn't just say NO if they really wanted to avoid a job, but remember that monks take vows of obedience. If your boss (the bishop, the archbishop, the Patriarch, or the Pope if you're in the West) says you must take the abbot gig, you take the job.

I'm not sure that running away is a legitimate route around the vow of obedience, but it's probably better than avoiding the vow of poverty by saying that all your wealth is for the glory of God. But I'm not an ecclesiastical lawyer so I'll give Athanasius a pass for his attempt to dodge the vanity of office. He sure wasn't going to be comfortable pretending to be an illiterate monk at his next monastery, since he was bound to draw the worst of the job assignments. Then he lived a few years as a hermit before resurfacing.

His old school chum Nicephorus Phocas was leading an expedition against the Saracens and tracked him down to be an almoner. The deal surprises me as surprisingly modern: Athanasius could get a cut of the money he raised for the expedition, his portion to be used for a new monastery, one at which one could live more like a hermit than a member of a community (an idiorhythmic monastery). Phocas led 308 ships with 77,000 soldiers, sailors and marines in a successful reconquest of Crete. He went on to lead a partially successful invasion of Syria -- he plundered tremendous wealth but the Empire did not hold his territorial gains. Eventually, Phocas rose to be the Byzantine Emperor, right around the same time that Athanasius' idiorhythmic monastery was being dedicated.

Fearing that his old friend would demand that he move to Constantinople to serve the administration, Athanasius did another runner. Phocas tracked him down on Cyprus and reassured him that he didn't have to join the cabinet or anything so he went back to the monastery to finish his work. He planted trees and added to the library and generally worked to improve the place until an arch collapsed, crushing the life out of him in AD 1003.

So about the picture: Athanasius is on the far right in the top row. There are other representations of him, images that feature him more prominently, even him alone. But for a monk who avoided leadership so assiduously, I figure that showing him among others is probably better. By the way, the people in the top row are (left to right) St. Peter of Athos, Mary Theotokos, Jesus, St. Pantaleon, and St. Athanasius. The larger images at the bottom are (left to right) Elder Daniel of Katounakia, St. Nectarius of Aegina, and St. Arsenius of Paros.
Posted by Tom Major at 7:58 AM