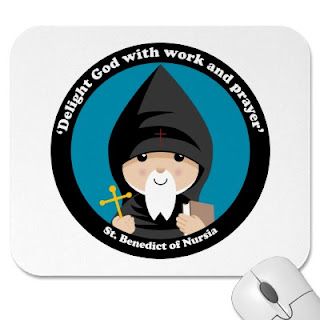 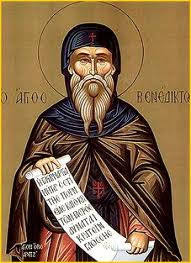 You won't get many bigger dogs than the founder of the Benedictine Order. This is the guy who founded the monastery -- correction: THE MONASTERY at Monte Cassino and subsequently created the Rule under which Benedictine monks would live. Although other orders would be created and would have modified rules, Benedict's Rule served (and continues to serve) as the foundation of Western, communal monasticism. Given the quality and quantity of beer alone coming from the abbeys of Europe (not to mention wine, honey, jelly, and jam), this is no small accomplishment.

As there was no real tradition of communal monasticism, monasteries tended to evolve on their own. An especially devout monk would set up somewhere on his on. Aspiring holy men would hang around, asking to become his disciples. He'd outline some expectations and they could meet those expectations or leave. Benedict's followers didn't like the harsh Rule (actually a lengthy list of onerous rules) he laid down, but neither did they think leaving was their best option. They poisoned his drink instead, but before drinking, he prayed. The cup smashed into pieces. Then they tried to poison his bread. While he was praying over his meal, a raven flew away with the bread. At this point they gave up and submitted.

Among the things they probably didn't like was the motto Laborare est Orare, to work is to pray. Benedict's monks were expected to work hard and produce enough to not only sustain themselves (which didn't take much since they owned nothing, slept in caves or stone cells, and at gruel) but also to provide for the needy. And there's always a lot of needy to keep providing for.

Benedict's monastery was founded in the ruins of a temple to Apollo built on the peak of Monte Cassino. I'd be a hypocrite if I gave Benedict a pass for having smashed the altar and statue of Apollo before rededicating the building to St. Martin. After all, iconoclasm is iconoclasm, whether you're busting up pagan statues or ripping down pictures of Jesus. It's a lowdown shame in an otherwise impressive career.

Benedict's mom died giving birth to him and his twin sister, Saint Scholastica. She too lived a life dedicated to God, remaining celibate and cloistered in a nearby convent. Click on her name above for a sweet story about her and Benedict. Her feast is on February 10.

Monte Cassino, by the way, was heavily bombed by Allied airplanes in 1944 on the erroneous assumption that German troops had occupied the spot. In fact, it was filled with refugees from the German occupation, but once the Allied bombing had begun, the Germans considered its strategic value and set up there. It was the scene of a brutal battle from May 11 to May 17, 1944.