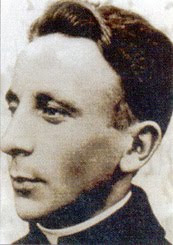 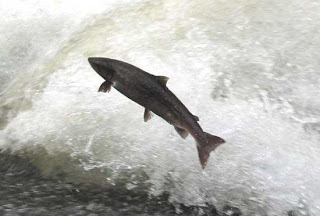 The Fourth of July is a good day to enjoy grilled salmon, right? Fortunately, the English authorities did not grill Patrick Salmon on July 4, 1594. Unfortunately, they executed him by hanging, drawing, and quartering. Crime: harboring priests. But Blessed Patrick doesn't have the feast day to himself.

Independence Day, right? As we celebrate American independence and the values we seek to enjoy and promote, it is fitting to remember Blessed Joseph Kowalski (pictured at right). He was educated at a Salesian school in Auschwitz before anyone had THAT association with that place. He then went off to become a priest, distinguishing himself for work with youth. He was arrested in Krakow by Nazi troops for providing non-approved youth programs (e.g. church choir). The freedom of worship, assembly, speech, association, and press, as well as the rights of the accused and convicted, the right to bear arms, the right to vote, and equal protection under the law were all denied to Poland. Hell, Polish independence was being denied, not only by Nazis on one side but by Russians on the other.

Father Joseph was sent Auschwitz, and no matter what you have heard about Catholic schools, it had gotten worse under German control. (Yeah, that's a pretty weak attempt at humor, but I'm not cutting it.) Renamed 17.350, he was scheduled for shipment to Dachau, but an officer took a momentary dislike to him and started beating him. Then he ordered Joseph to stomp on his rosary. Joseph declined, for which he lost his all-expenses-paid trip to Dachau and was instead assigned to a hard-labor gang. He continued to minister to other prisoners at night, as well as he could, but suffered continuous beatings and abuse. Eventually, on a whim, guards drowned him in a cesspool. He was thirty-one years old.

Lot of saints are celebrated on July 4. Elizabeth of Portugal is a very big deal. Haggai and Hosea, prophets from the Old Testament, are celebrated today. And all of them tend to be obscured in the USA by the nation's birthday. And at least some of us would remember the twin union victories at Gettysburg and Vicksburg in 1863. [True, Gettysburg was really over on the third, but skirmishes plagued the Confederate retreat. If you were being shot at, it would surely feel like a battle to you.] But beyond Saint Elizabeth is the virtue of peace. Beyond Blessed Patrick and Joseph is the freedom of worship. Beyond Gettysburg and Vicksburg are the fundamental human rights of every person; there was no consensus on that at the beginning of the war, but by 1863 every member of the Lincoln administration was in agreement. And beyond the nation's anniversary are the virtues for which it was formed and to which it must remain dedicated:

We hold these truths to be self-evident: that all men are created equal, and are endowed by their Creator with certain inalienable rights, that among these are life, liberty and the pursuit of happiness. That to secure these rights, governments are instituted among men, deriving their just powers from the consent of the governed. That whenever any form of government becomes destructive to these ends, it is the right of the people to alter or to abolish it, and to institute new government, laying its foundation on such principles and organizing its powers in such form, as to them shall seem most likely to effect their safety and happiness.

I might have seemed to digress into mere patriotism on a blog that ought to stick to religious history (and yes, mythology). I did not. National self-determination and freedom of religion were issues for ancient Israel, just as they were for Englishmen at home and in the colonies. And they continue to be for men and women around the world. Life, liberty, pursuit of happiness, equal protection under the law, and the rights of the accused and convicted are not values exclusive to the Americans (and they damn sure are not anti-American ideals!); they are human rights and must be promoted by people of conscience -- by God's people -- always.

Wow. My high horse sure is tired today. Off to the pasture with him. Happy independence day.
Posted by Tom Major at 4:00 AM