July 9 -- Feast of the Martyrs of Gorkum 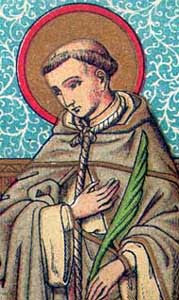 The focus of zealots on the things which divide the faithful rather than the things which unite them never fails to stun me. The quest for orthodoxy (small o) in Western Europe during the Reformation must look ridiculous at first glance.  For most, it probably never ceases looking ridiculous.

Once the Calvinists and Lutherans had wrested control of Belgium, the Netherlands, and Luxembourg from the Spanish Catholics (a war that had as much to do with national identity, politics, and economics as it did religion), they of course turned their attention on each other. The big ProtesTent was too wide for them -- they wanted only the purest of the faithful worshiping under their canopy.

Once the Calvinists had taken control, they established an Inquisition to hunt down and execute those who would not abandon the tenets of their faith. The Gueux de Mer (seabeggars, i.e. anti-Spanish rebels) conquered Gorkum, Netherlands and rounded up fifteen offenders: priests, lay brothers, and Catholic students. Over the following days in the early summer of 1572, as these men were being threatened tortured, and coerced into abandoning their faith, four more prisoners were added. The most pressing points of disagreement were the Transubstantiation Question (whether the Communion bread actually becomes the presence of God) and the Apostolic Succession Question (whether the Pope is really God's Vicar).

On the urgency of these two points, men chose to die rather than to acquiesce to the ideas of others.

Through the night of July 8 into the morning of July 9, they were beaten, burned, and hanged; their bodies were mutilated after they died. You can find the individual names and more details here.
Posted by Tom Major at 8:32 AM