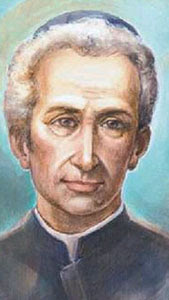 Different eras honor different aspects of holy lives. Nothing won you sainthood faster in the early days than suffering for your faith -- preferably with a gruesome death to follow. Thus, April 1 is the feast of St. Macarius, called Wonderworker for his many miracles. Yet three write-ups of his life failed to describe any of the wonders he worked. Instead, they all focus on his exile because of his defense of icons. With the recent flap about murals at Maine's Department of Labor, I am somewhat sensitized to the inflamed feelings inspired by art, and then as now, my sympathy is with those who support the art. Yet it's a little less inspiring than a fight for the faith itself, and a little less interesting than the struggles of Ludovico Pavoni.

Saints from the nineteenth century almost all seem to have focused on social work for the urban poor. It makes sense. The industrial revolution was in full swing, and the massive dislocation resulted in a scale and concentration of poverty not seen in the West since Rome. Actually, given access to running water, standards of living were probably worse then ancient Rome.

Ludovico was among those who stepped up to help. He opened an orphanage, linked it with a trade school, and then a publishing house. He subscribed to the belief that spiritual conditions would improve after social and economic improvements had been won. He founded a religious order to support this concept and begin other schools.

In 1849, he native Brescia was at war with the Austrians. He moved all the orphans to safety, but died taking refuge seven miles away while the city was destroyed. I suppose there's an element of martyrdom in this story too, but I tend to think it was the work, more than the suffering, that won his canonization.
Posted by Tom Major at 4:51 AM