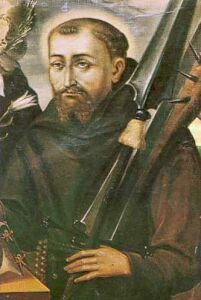 It is Easter morning as I post this, so I think that feast supersedes any and all others in the Christian calendar. Nonetheless, it is still the feast of Saint Fidelis, and he ought to have his moment too.

You might notice in the picture he has a spiked club and what appears to be an early firearm with some sort of massive spearhead on the end of it. What we can't see is that he's trampling on the banner of heresy.

He was christened Mark Rey, but adopted the name Fidelis when he left the lawyer's trade to become a Franciscan friar. He had been sorely disgusted by the greed and corruption of his fellow lawyers and gave away all his accumulated wealth to the needy, especially poor seminarians, upon he joining the friars.

The arms in the picture symbolize his assignment as guard of the friary, but he also worked as a healer. At least, he did that until he led a group of Capuchin monks to Switzerland to convert Calvinists and Zwinglians. The Swiss didn't dig it. Fidelis was killed by Calvinist soldiers in 1722 at age forty-five. He died after two sword-strokes to the head, but the soldiers disfigured and dismembered his body as a warning to would-be Catholic missionaries.
Posted by Tom Major at 7:26 AM