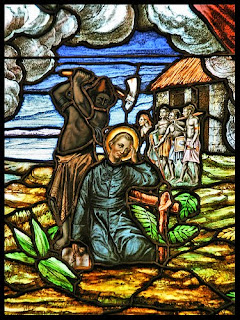 Like Peter Damien, who sailed after him, Peter Chanel was a nineteenth century missionary to the South Pacific. Well, certainly Chanel went to the South Pacific, specifically the island of Futuna, which sounds made up but was one of the French Iles de Horn, a little northeast of Fiji. Hawaii is a little north of the equator, which means it is central Pacific at best. But they both set off for the exotic, and obviously dangerous, island paradises in which to convert the locals.

Damien, you recall, lived among the lepers until he himself contracted leprosy. He became an international celebrity, calling attention to the suffering on Molokai, assured that his work would continue after his death. Chanel had a shorter career and less comfort (though some) at the end.

Chanel knew nothing of the local language, but at least for a time had a merchant as a translator. French and British merchants were setting up trading posts all over the Pacific at that time (the Americans were too busy whaling and conquering North America to get in on the Pacific game). Protected by gunboats cruising the area, the merchants (and sailors on shore leave) acted with impunity in their relations with the locals -- exploitation does not put too fine a point on it. That would be the first strike against Chanel's mission.

Chanel lied about his intentions when he first arrived, guessing that a scholar studying their culture would be more welcomed than a missionary intending to change their faith. That would have probably been true, had he not lied, but as soon as he began preaching, the king saw him as both subversive and deceptive. Is that two strikes or three?

The King's son requested baptism, which was of course three outs. The next batter up swung a mighty bat -- well, more of a club. And an axe or some sort of mattock. Peter Chanel was clubbed and hacked to death on April 28, 1840, at the tender age of thirty-seven.

He did have comfort that it was God's will that he be killed, and that his work would outlive him. In this, he was correct. The King was dead within a year (no foul play, oddly enough) and the natives all were baptized. Yeah, I probably would have been dunked too if I thought that a French gunboat was going to sail up, looking to avenge their martyr.

The picture is a detail of the stained glass window, "St Peter Chanel Receives His Reward," found at St. Louis Cathedral in St. Paul, Minnesota. A picture of the whole window is available at http://www.flickr.com/photos/jgardner/3480440400/
Posted by Tom Major at 5:23 AM