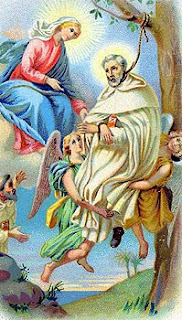 The picture is about the best saint card illustration I've ever seen, and Pete's not even a saint.

In fact, he was very far from a saint in his earlier years. He was a brigand, living the fast and wild life. Only when his gang tried to kidnap Peter's father did he reevaluate his progress along the road to perdition.

He gave up his life of crime and joined the Mercedarians, a congregation dedicated to ransoming captives (especially those held by the Moors). Peter did a lot of work freeing a lot of people, but eventually ransomed eighteen captive Christian children by taking their place. He was given an equivalent amount of torture that would have been administered to the eighteen children (who knew it was measured that precisely?). Then he was hanged by the neck until they believed he was dead.

Ha! The joke was on them. He wasn't really dead.

Except the joke was on him. His body was wrecked from all the torture and he lived with brutal pain for the rest of his life.
Posted by Tom Major at 4:30 AM