April 29 -- The feast of the Martyrs of Corfu 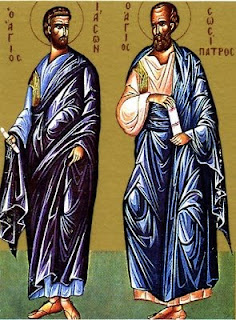 Imagine two storylines beginning in radically different places and then converging to an dramatic juncture. The first involves to disciples of St. Paul: St. Jason and St. Sosipater. The former was the bishop of Tarsus; the second was bishop of Iconium. After long, successful runs as bishops, they set out to evangelize. Corfu seemed like a clement place, but they were busted and thrown in prison by the Roman governor there.

Are they merry? Vicious? Noble bandits like Robin Hood or brutal robbers like John Dillinger? You'll have to fill that in yourself. But what we do know is that somehow, the Governor has arrested them and thrown them in prison where they meet the hapless missionaries.

The Governor may have been expecting the thieves to intimidate, perhaps even eliminate, the bishops. Consider his frustration when he discovered that the thieves had been converted to Christianity. When he could not get them to recant, he had them boiled together in a large vat of oil or pitch.

The bishops, however, were not killed with them. There's a legend that the King's daughter (Governor's daughter?) was so inspired by the fidelity of the martyrs that she gave away all her jewels to feed the poor. The girl, Cercyra, was threatened by her father, but would not deny Christ. He threw her in prison, and when she would not convert, he burned the prison down. She however, was unharmed, so even more people were converted and sought baptism. The King had his daughter tied to a tree and killed by arrows, leading the new converts to flee the island. The King pursued them, but his boat sank and he died, allowing all the others (including the two old bishops) to live happily ever after.

A different account suggests that Jason was torn apart by wild beasts, but I cannot find any other reference to Sosipater's death.
Posted by Tom Major at 4:00 AM