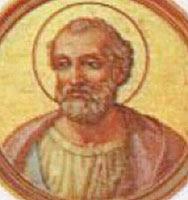 Marcellinus was the 29th pope, wearing St. Peter's ring from AD 296 to AD 304. In AD 303, Diocletian and his co-emperors (one Augustus named Maximian and two Caesars -- junior emperors -- named Galerius and Constantius) launched the last and most virulent of the persecutions of Christians. Tough time to be a pope.

Some modern sources list Marcellinus as a martyr, but none of the ancient sources do. One notes that he too was affected by the persecution, which seems as likely to imply that he was threatened, maybe even into going underground.

There were some nasty rumors leveled after his death that he had handed over scriptures to be burned, and may have even scattered incense before the polytheists' idols, but that seems like a load of hooey to me. My guess is he holed up somewhere safe, waiting for it all to blow over, but died before it did.

St. Marcellus I succeeded Marcellinus in AD 308, which means that for four years, there was no pope. I don't know if there are other such gaps, but the doubling up during the anti-pope crisis does not make up for the lack of a pope in the fourth century.
Posted by Tom Major at 4:30 AM