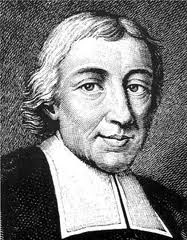 I could hardly ignore the patron saint of teachers, but first, this from the "Thanks, Mom" files. It's not exactly the way it played out in The Life of Brian, but it's pretty odd.

When the persecution of Maximian was announced, St. Kallipios went right up to the Governor. No waiting in line to be martyred for him -- he wanted to volunteer right up front. He was arrested and tortured in the usual ways. His mom visited him in prison to tell him how proud she was and that he should not back down under any pressure. When his crucifixion date was announced (coinciding with the Thursday of Holy Week), Mom returned to the prison to bribe the officials to wait one day, so that he could be executed on Good Friday, the celebration of Jesus' own crucifixion. It may not be a pony on your birthday, but it's pretty thoughtful.

Now, to St. Jean Baptiste de la Salle. He was the privileged son of a wealthy family, a doctor of theology working as the Canon of the Cathedral at Rheims. He showed no particular promise as a holy man, though he seemed to be a capable career clergyman. Adrien Nyel, a layman in Rouen, had opened four free schools for poor children, and approached Jean Baptiste about opening one in Rheims. The canon agreed, but found that he was paying for everything (including the staff) himself. He also found that the teachers were woefully ill-prepared, so he moved them into the family home and took over instruction of them so they could teach the children.

His family rebelled. He abandoned the family home and moved into a rented building with teachers. There, they created the Brothers of the Christian Schools, a service order for laymen. No ordination was necessary, but the brothers had to take a vow of obedience. In order to get the order recognized, Jean Baptiste had to expand the vow. Using the standard monastic Rules as a basis, he added the concept of achieving holiness through teaching; the brothers were to become ambassadors of Christ to the young. The Brothers were eventually accepted as an Order in 1726, about seven years after Jean Baptiste's death.

Jean Baptiste had seen his project through many trials. The schools were good enough to be in direct competition with tuition schools, so there was naturally antagonism and criticism. Further, there were concerns about non-priests being so instrumental in bringing Christ to children. Nonetheless, the Order grew in popularity throughout the eighteenth century, right up until the French Revolution, when those atheistic cannibals boiled the baby in its bathwater and called it soup. The Order came back following the restoration and grew in popularity and service throughout the nineteenth century.
Posted by Tom Major at 11:11 AM