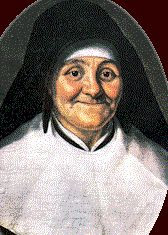 If you read yesterday's post, today's comes a little later and faces challenges a little greater. The daughter of formerly prosperous peasant parents, Julie was a manual laborer to help her folks make ends meet. After a few years of labor, she was sitting with her dad when someone tried to murder him. The shock of this left her partially paralyzed that an incompetent doctor soon parlayed into total paralysis. Well, perhaps not total, but she was unable to walk.

Being bedridden and spiritually inclined, a group of wealthy ladies soon formed around her, all of whom became her students in matters Christian. Thus, when the French Revolution broke out, she was accused of consorting with aristocrats and hiding priests. She was smuggled away in a haycart to Amiens, where she, a viscountess, and a priest began to establish the Institute of Notre Dame. Later, the Institute would become the Sisters of Notre Dame de Namur.

An egalitarian Order, the sisters made no class distinction among themselves. Everyone did spiritual study; everyone did manual labor. Their tasks were to prepare women to receive Communion, to care for the poor, and to educate all who desired it. Like Jean Baptiste's Order, the Sisters of Notre Dame were resented and suspected, but eventually accepted.

As for St. Julie herself, she attempted a few steps after one of the priests with whom she worked organized a novena for her. Finding some success, she built up her strength slowly and eventually restored her mobility after twenty-two years of paralysis.
Posted by Tom Major at 12:05 PM