April 30 -- Feast of Blessed Marie of the Incarnation 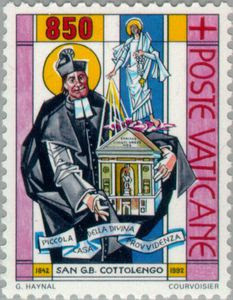 Sometimes, the lives of extraordinary people begin to look ordinary and it is hard to see their distinguishing achievements. Pope Pius V is celebrated today; he was a stalwart defender of both the faith and the Church against many threats. Maybe next year, your Holiness. St. Giuseppe Benedetto Cottolengo is also celebrated today; he was a tremendously effective nineteenth century social reformer whose work on behalf of the poor aided thousands of the neediest, much like Francis de Sales and Vincent de Paul. And being much like them makes it hard to stand out. But it's his picture, not Marie's that's up on the blog.
Marie Guyard wanted to be a nun, but was persuaded to accept an arranged marriage at age seventeen. Within two years, she was widowed and the mother of a son, Claude. The son, Claude Martin, is the hero of this story, even though he unsuccessfully attempted to thwart the fruition of his mother's ambition. She tried blending the charitable life with secular work, but felt continuously tugged toward taking the veil. At around age thirty, she placed he thirteen-year-old son in her sister's care and joined the Ursuline Sisters.

Here's where the story gets distinct (though perhaps a little sad). Young Claude rallied a crew of 12 and 13 year-olds to storm the convent and bust Marie out. It must have been a very well designed building because the boys were unsuccessful and I refuse to give any credit to the sisters in the defense.

Sister Marie decided that he calling was to build a house for Christ in the New World, so after raising enough money, she sailed for Canada in 1639. Working against much adversity -- deprivation, the reluctance of the Natives for conversion, a territorial archbishop who wanted to control her program -- she nonetheless enjoyed tremendous success. She supervised the building and rebuilding (after a fire) of the Ursuline house in Quebec, wrote dictionaries in several Native American dialects, and even wrote a catechism in Iroquois. She also wrote over 12,000 letters back to France, no doubt a source of interest and inspiration for future Habs.

As for young Claude, things turned out okay. he eventually was so accepting of his Mom's decision that he became a Benedictine priest in 1641 and wrote her biography.
Posted by Tom Major at 6:55 AM