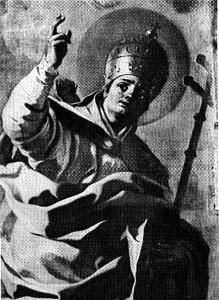 I'm not sure I ever really believed in signs (in the metaphysical sense). Sometimes, they're merely a way of justifying what you want to do anyway. This entry, for example, was nearly completed. It was a voluminous account of Pope Saint Leo IX, also known as Bruno of Toul. Just as I neared completion, the machine mysteriously shut down. When I rebooted, all but the date and title were lost.

Too long for Leo's taste? Too unflattering? Mere coincidence? Hard telling, not knowing, but if I were supposed to write about St. Alphege instead, the name and date would not have been saved. So here's Leo IX, Part Two -- the Abbreviated Version.

Quick update on the ghost in the machine. I wasn't able to add the first picture of Leo that I selected either. It was just unacceptable to the machine. This one is much less tranquil, less serene, as befits the saint.

As bishop and pope, Leo IX tried to reform the system that had brought him to power. Nepostism literally means preferring the nephew (nepos). Bruno, the nephew of Emperor Conrad II, rose from canon to bishop to pope through noble connections. He waged war on behalf of his uncle, but in the eleventh century, a clergyman who didn't fight was more likely to be a disabled veteran than a conscientious objector.

Once he became pope, he worked tremendously hard to eliminate the corrupting errors of the clerical system: simony, nepotism, lay investiture, and clerical marriage. I know that from the (relative) comfort of the twentieth century, clerical marriage seems like a good idea. But if you are trying to protect the Church as a merit-based opportunity for careers, then generations of Bishopsons and Popesons are counterproductive. On that score, he was right. I will not claim that the Church is well-served by the ban on clerical marriage anymore, but that's a debate for another forum.

Where His Holiness was not infallible was on the subject of waging war. His spiritual adviser, Peter Damian, told him that war is for emperors, not popes, but he ripped into the Normans for having messed with papal turf in southern Italy, and the Normans in turn took it to him. He was defeated, captured, and forced to concede terms. What's worse, the whole mess triggered a diplomatic spat between him and the Byzantine emperor , resulting in the Patriarch of Constantinople excommunicating him. The papal legate, Humbert, may have excommunicated the Patriarch first -- I'm not sure. Leo was dead by the time the news reached Rome, but it did cause the schism between the West and East that has not yet been closed. Yes, the filioque debate was part of that, but so were the bruised egos in Rome and Constantinople, and those must lie in large part on the head of Leo IX.
Posted by Tom Major at 7:51 AM