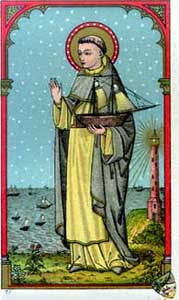 He is the patron of mariners and sailors of all kinds, and is enlisted for prayer (along with St. Elmo) when the sea threatens a ship. He is the patron because he worked the waterfront late in his career, offering spiritual and material help to the sailors in port. But I get ahead of myself.

Peter was one of those well-born young men who used the Church to advance his career. His uncle was a bishop and trained him to be a priest. He got a dispensation to be promoted to Canon, even though he didn't meet the minimum age requirement. It was probably a case of simony, but if your started young, your investment (bribe) would be well-rewarded in a couple of years, leaving you a lifetime of fat paychecks.

Peter was making a grand procession into town one Christmas morning when something spooked his horse. He was thrown, in all his holiday finery, into a dung heap. The crowd was more than a little amused.

Peter withdrew from public life, prayed, and discovered that he had been misspending his time and wealth. He joined the Dominicans and became a serious churchman. Friends and family tried to cajole him back to the lucrative side of the Church, but he stuck with the serious service to God and his fellow men.

He was the Chaplain to King Ferdinand III of Castile, serving as Denny Downer to all the bon vivants in court. He also accompanied the King onto the battlefield against the Moors, advocating for humane treatment of the Moorish prisoners. Eventually, when court life seemed too tempting and luxurious, he headed for the fields to minister to the shepherds, and then to the waterfronts to minister to the sailors.
Posted by Tom Major at 9:43 AM