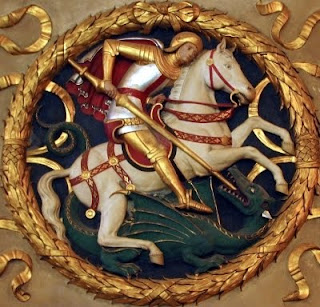 George was a soldier in Palestine, beheaded in AD 304, the second year of Diocletian's persecution. He grew up in Palestine but traveled Nicomedia (modern Turkey) while still a teenager to join the Roman army. This was no childish impulse -- both his parents had died and his best shot was to trade on his father's military service by enlisting. He did well in the army, eventually rising to the rank of Tribune in Diocletian's own guard.

In AD 303, the order went down to arrest all Christians in the military. George was busted, but Diocletian worked hard to win his apostasy. Promises of rich rewards were offered; threats of slow and painful death were made. All to no avail. Eventually he was perforated on a wheel of swords, passing out but being revived three times. Following this, he was beheaded.

That's the historical side of his life, more or less. At very least, he was a soldier in the Roman army executed during Diocletian's persecution. But that has little to do with the picture above.

According to his legend, there was a dragon (crocodile?) living in a well-spring in Libya, or maybe Lydda, in Palestine. Lydda makes more sense as George was born there, but Libya is more commonly stated. Anyway, people living in a desert need water, but the dragon needed to be sated before they could draw it. Thus, two sheep a day was the price of water. When they ran out of sheep, they settled on maidens. Why they'd go with young girls instead of the old and infirm, I can't say. Plainly, they weren't actuaries.

A princess was selected in a lottery, but rather than let a princess be eaten by a monster, George stepped up and killed the beast. Abundant versions, artistic renderings, and critical analyses with links to older legends can be found.
Posted by Tom Major at 8:06 AM

The Oxford Dictionary of the Saints